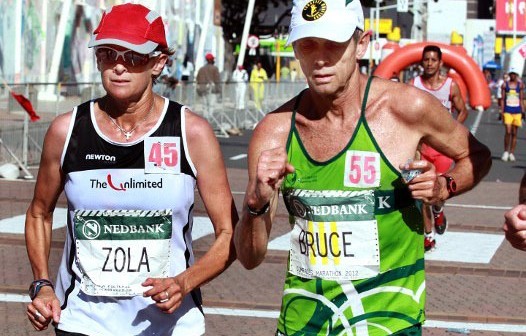 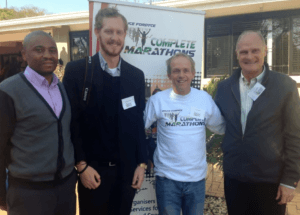 We recommended that Complete Marathons hold a briefing for press and customers to launch the initiative.

This follows the successful pilot of Bruce Fordyce’s Complete Marathons Concierge Service at the 2014 Comrades Marathon. The company will also make this service available at other marathons

Presentation by the Speakers

Bruce Fordyce launched the event to about 12 journalists on the day cover all aspects of the service and the Village for disadvantaged runners who have entered the race.

To address the needs of ‘homeless’ runners, Bruce Fordyce, a director of Complete Marathons, is launching a Runners Village for disadvantaged at next year’s 90th Comrades Marathon.

This will complement the successful pilot of Bruce Fordyce’s Complete Marathons concierge service at this year’s Comrades Marathon for local and overseas participants.

“The goal of the Complete Marathons Village is to sponsor 200 disadvantaged South African runners from various running clubs within the country,” said Fordyce. Sponsorship opportunities exist for branding and to support the Village.

The Village is the brainchild of Fordyce who sees the need to support ‘homeless’ runners who do not have the funds for accommodation.

“We aim to house and cater for the disadvantaged athletes before, during and after key races in shared accommodation in a stable dome frame. The accommodation will consist of a two-man tent with two mattresses, two blankets, branded fly sheets, a solar light and sleeping bag,” said Fordyce.

“In addition, each beneficiary will have access to full ablutions, including showers and toilet facilities. Race lockers will also be provided to assist the runners in keeping their gear safely stored,” he said. Breakfast and dinner will be provided.

“Understanding that this vital project rests entirely on ensuring that the beneficiaries involved are clearly identified and well assisted, the process of selecting beneficiaries will be carefully managed,” he said.

All running clubs in South Africa will be approached and advised of the opportunity that exists for disadvantaged runners from their club to be included at the Complete Marathon Village.

“Each club will need to provide a written motivation identifying the runner/s they would like to recommend for consideration. Driven by the BEE Codes of Good Practice, a committee will be established to select beneficiaries based on this written submission, taking into consideration factors such as an income of less than R3 000 per month and current employment status of nominated beneficiaries,” said Fordyce.

Continuing on the success of this year’s pilot Comrades Marathon concierge service, it has now been formally launched.

It will be aimed at all runners at future races and sporting events including next year’s Comrades Marathon. The focus will be on travel and accommodation packages, airport transfer, route tours, race day support marquees on the route, an after party and shuttle services before and after the race.

Runners will have the opportunity to board a coach and travel the exact route of the race with Fordyce the guide to answer runner’s questions as well as providing advice.

“We will also provide guaranteed race support at designated route points where strategically placed marquees will cater for runners giving access to pre-packed race items, support, ablutions, a  masseur service and meeting facilities for family and friends,“ he said.

“Not every runner has a second, or in many cases, the runner’s second has difficulty in locating the runner. For this reason we are providing support marquees to cater for each runner’s specific needs.”

Runners will provide Complete Marathons with their race supplements and replacement gear such as socks, drinks, shoelaces, sunglasses and sun block. The items will be placed in colour-coded bags at the support marquees along the route.

The after-party provides an opportunity for runners to celebrate the race with family, friends and other runners. A full buffet meal will be provided and all attending will have an opportunity to purchase a signed Bruce Fordyce T-shirt.

Approximately 12 journalists attended and over R150 000 in media coverage was generated in print, online and TV coverage. The coverage was as follows: